Have you ever wondered what is Masala Chai, Indian Spice Tea or Chai Tea Latte on the cafe shop menu? You will be glad to know the story behind that will help you order the right type of chai. This is the tale of the ever popular Indian Masala Chai and the benefits of drinking it. 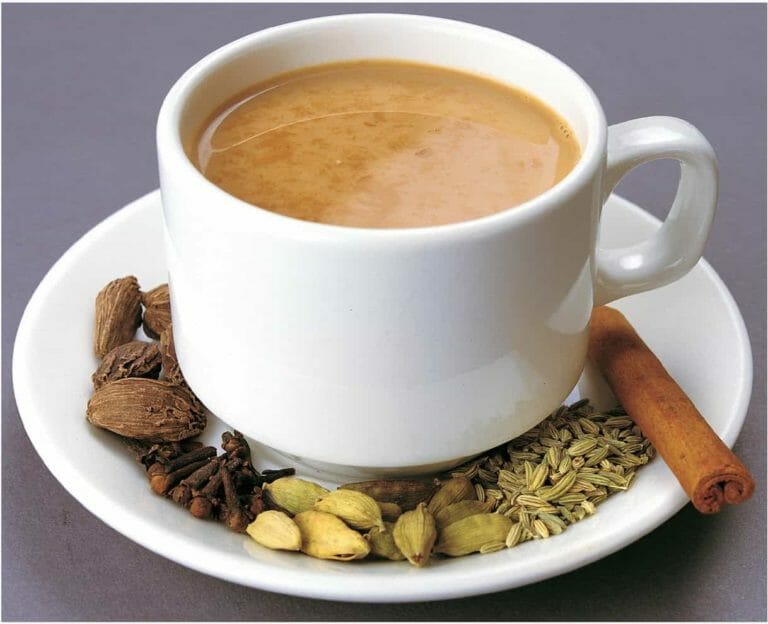 Content quick links
1. Where Does Chai Come From?
2. What Is The Difference Between Masala Chai and Chai Tea?
3. Masala Chai Benefits, Are There Any?
4. Masala Chai Tea Recipe

Not long ago, Masala chai stall was something that you would find at every few steps in narrow Indian by lanes and on National highways .

A very common sit down and chat over a cuppa spice tea kind of thing.

It did not require going to a fancy cafe and ordering a ‘Chai Latte’ from the menu just because it sounded different and exotic!

Who was to know that this humble Indian spice tea would take over many cafe menu boards and turn into a sophisticated drink!

Where Does Chai Come From?

My first experience of coming across the term ‘Chai Tea’ was looking at the Starbucks menu board and staring at something that was both intriguing and amusing.

It read ‘Chai Tea Latte’, which interestingly use 3 languages to describe a cup of Tea. ‘Chai’ in Hindi (Indian language) meant ‘Tea’, ‘Tea’ as we all know is an English word for the beverage, while ‘Latte’ is Italian for milk.

So the literal translation of ‘Chai Tea Latte’ is ‘Tea Tea Milk’!

That was enough to put me off trying something that perhaps even the makers did not know what it really was!

So to answer the question, Masala Chai Tea translates to Spicy Tea which originates from the Indian Subcontinent.

My curiosity took better of me and I did try ‘Chai Tea Latte’.

If I am to be honest, I was disappointed with the milky, bland, flavour lacking light brown liquid in a large tall glass!!

It did not taste anything like an Indian spice tea would.

So needless to say I stuck with making my own at home.

But one has to acknowledge the global reach and commercial acclaim a humble cup of regional tea has gained!

What Is The Difference Between Masala Chai and Chai Tea?

It hopefully makes better understanding of this popular beverage.

‘Masala’ is an Indian word which means a blend of spices and ‘chai’ means tea.

One of the first things you should do is start referring to chai as just ‘chai’ rather than chai tea as you are actually saying the word twice in two different languages.

In terms of the authenticity of taste and the difference between chai, masala chai or Indian spice tea is the ingredients used.

Let us see the different types of Indian chai:

It is the type that is made without any spices. You can choose to add milk or sugar or serve without.

This is the chai or the Indian milk tea as some call it made with spices, sugar, milk and in some cases fresh ginger.

There are many different chai recipes. Some are made without spices, some with limited spices and herbs and others pretty strong on spices.

There is also the difference of intensity on flavour, milkiness and sweetness.

Most households and roadside tea stalls have their own special chai recipe.

In short, the difference between chai tea, chai tea latte and Masala chai is :

Masala Chai Benefits, Are There Any?

I start every cooking class with offering my guests ie. attendees with a cup of hot Indian Masala tea.

The question, that normally follows is ‘ is masala chai

I am not a very winter or autumn kinda person. It makes me lazy and lethargic.

Given a choice, I would simply love a duvet day with only a hot cuppa spicy masala chai and buttered toast for company !!

Most spices used to make masala chai not only have their individual health benefits but they work in synergy to help your body combat inflammation. The main Anti-inflammatory ingredients being ginger and cloves which also help in reducing pain. ( remember how clove oil helps reduce toothache?)

We all know that tea contains caffeine which is a stimulant, and what we reach for when we need to energise a tired mind and body.  The tannins present in tea help calm the body and revitalize it.

Adding uplifting spices such as green cardamoms and cinnamon to a stimulant like caffeine acts as the best way to drive away fatigue.

Most spices especially those used in making chai tea are believed to strengthen the immune system and keep common infections at bay.

The immunity-boosting and body warming effects of clove, cinnamon, green cardamom, and ginger make masala chai a great way to keep coughs and colds at bay.

When it comes to that time of the month and you need something to fight the annoying PMS, tea is your go-to buddy.

The painkiller spices such as clove, cardamom, and cinnamon help deal with period pains by relaxing the muscles and keep your nerves calm.

The caffeine present in tea leaves promotes lipolysis that is the process of breaking down stored fat and stimulates cycles that metabolize fats.  According to Ayurveda Tea leaves are known as a heat-generating substance and therefore helps speed up your metabolism.

So pick up a cup of this hot delectable medicinal drink to keep those extra inches off but do remember to stay clear from sugar!

Masala chai as you would have gathered by now is a spicy sweet milky aromatic tea.

The uniqueness is the mix of whole spices used. Some choose to add ginger and few may not.

A recipe for Indian Masala chai varies in different households and as per personal taste.

The recipe lists spices that you can choose to make Indian spice tea at home giving you the flexibility to alter the recipe to suit your taste and experiment with other spices and flavours.

Here is a fool proof Masala chai recipe to follow.

Masala chai is traditionally boiled instead of brewed in hot water, milk with a selection of spices and sweetened to varying degrees.

If milk and sugar is not your thing then you can easily substitute the two with lactose free milk or leave them out.

There are many reasons for you to grab a cup of hot Indian masala chai to kick start your day or when you need an energy boost.

Promise you wont be disappointed.

Do share your experience below of sipping on a cup of this aromatic Indian milky tea. 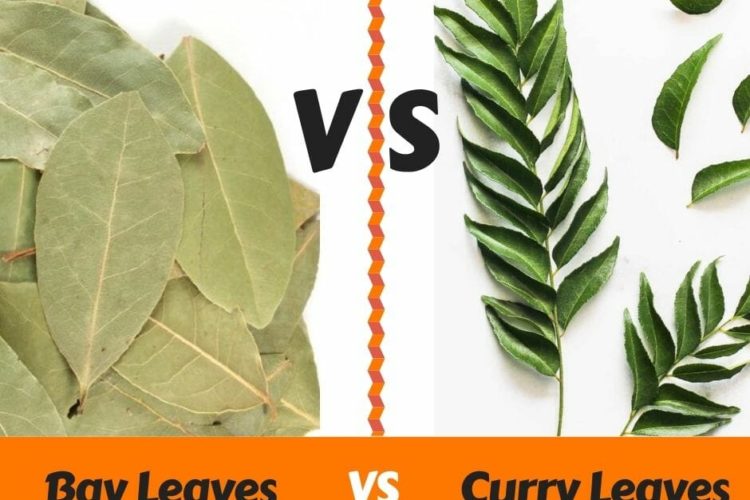 What is the difference between Curry leaves vs Bay leaves

Two of the staple spices mainly in the Southern Indian and Sri-lankan cuisines you will... 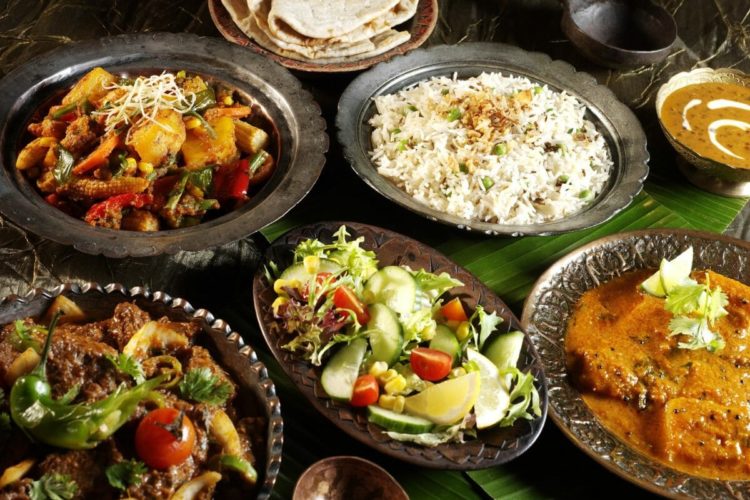 ‘Healthy’, in my opinion is a subjective term ! What may work for you may... 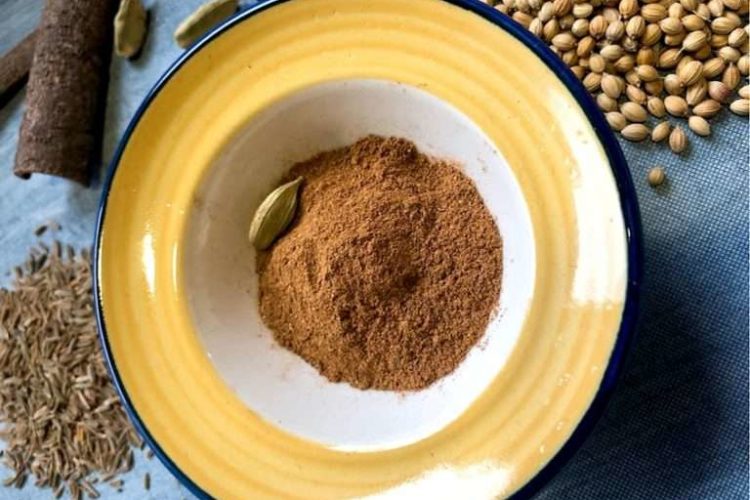 ‘Curry’ is a word used multiple times in the culinary world and has become synonymous...

What is the difference between Curry leaves vs Bay leaves

Two of the staple spices mainly in the Southern Indian and Sri-lankan cuisines you will...

‘Healthy’, in my opinion is a subjective term ! What may work for you may...

‘Curry’ is a word used multiple times in the culinary world and has become synonymous...

This website uses cookies to improve your experience while you navigate through the website. Out of these, the cookies that are categorized as necessary are stored on your browser as they are essential for the working of basic functionalities of the website. We also use third-party cookies that help us analyze and understand how you use this website. These cookies will be stored in your browser only with your consent. You also have the option to opt-out of these cookies. But opting out of some of these cookies may affect your browsing experience.
Necessary Always Enabled
Necessary cookies are absolutely essential for the website to function properly. These cookies ensure basic functionalities and security features of the website, anonymously.
Functional
Functional cookies help to perform certain functionalities like sharing the content of the website on social media platforms, collect feedbacks, and other third-party features.
Performance
Performance cookies are used to understand and analyze the key performance indexes of the website which helps in delivering a better user experience for the visitors.
Analytics
Analytical cookies are used to understand how visitors interact with the website. These cookies help provide information on metrics the number of visitors, bounce rate, traffic source, etc.
Advertisement
Advertisement cookies are used to provide visitors with relevant ads and marketing campaigns. These cookies track visitors across websites and collect information to provide customized ads.
Others
Other uncategorized cookies are those that are being analyzed and have not been classified into a category as yet.
SAVE & ACCEPT
Scroll to Top