Jump to Recipe
Step by Step 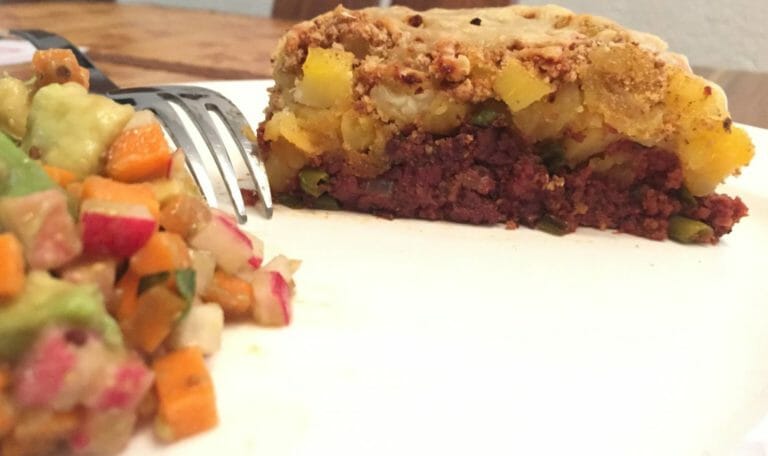 This amazingly easy canned corned beef hash recipe is made with some boiled potatoes, vegetables and finished in the oven.

This oven version of baked corned beef hash makes it more of a pie than the traditional breakfast hash with eggs.

Baking requires less fat, which makes this corned beef hash from can with added vegetables more healthy compared to a fried up version.

What is Corned Beef?

Corned beef is made by curing beef with grains of salt and leaving it to brine to tenderise the meat.

Normally it is a brisket cut, that is the cut of meat from lower chest or breast that is used to make corned beef.

As brisket is a tough piece of meat, brining helps to break it down and make it super tender and easy to cook.

Increasing the corned beef out of a can has become popular due to cost and convenience.

It is one of those dishes you will see the photos and recipes flooding on social media closer to St. Patricks day.

The sad part is that corned beef isn’t an ideal healthy choice for dinner.

Saying that nor drinking beer and eating bread every day is either.

Being sensible and cooking homemade corned beef once in a while won’t do any extreme damage to your health.

While corned beef is high in saturated fat, cholesterol and sodium it also has good amounts of vitamin B12 and zinc.

This recipe is a healthier version of canned corned beef hash, using low – calorie, low salt, corned beef like the one here from princes that I bought from the British Corner Shop. 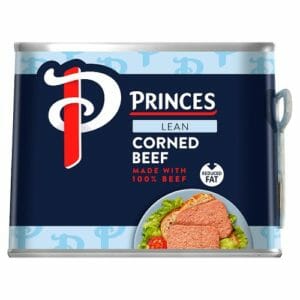 I used olive oil to saute the onions.

The added green beans, leek and spices give this dish an extra dash of flavour and health.

How To Get A Crust On Canned Corned Beef Hash?

Who does not like a nice crusted hash. There are simple ways of giving your hash a lovely crunch. Few tips to get a crust are:

If you are a looking for a vegetarian option for corned beef then you can follow the same recipe using Quorn mince instead of corned beef.

You can find Quorn in any supermarket. It’s a perfect replacement for meat.

You can also use soya granules for making this recipe vegetarian.

How To Make Corned Beef Hash With Canned Beef

Since I am baking this dish, the only time-consuming part is boiling the onions.

Here is a step by step guide with pictures on how to make Baked Corned Beef Hash at home. 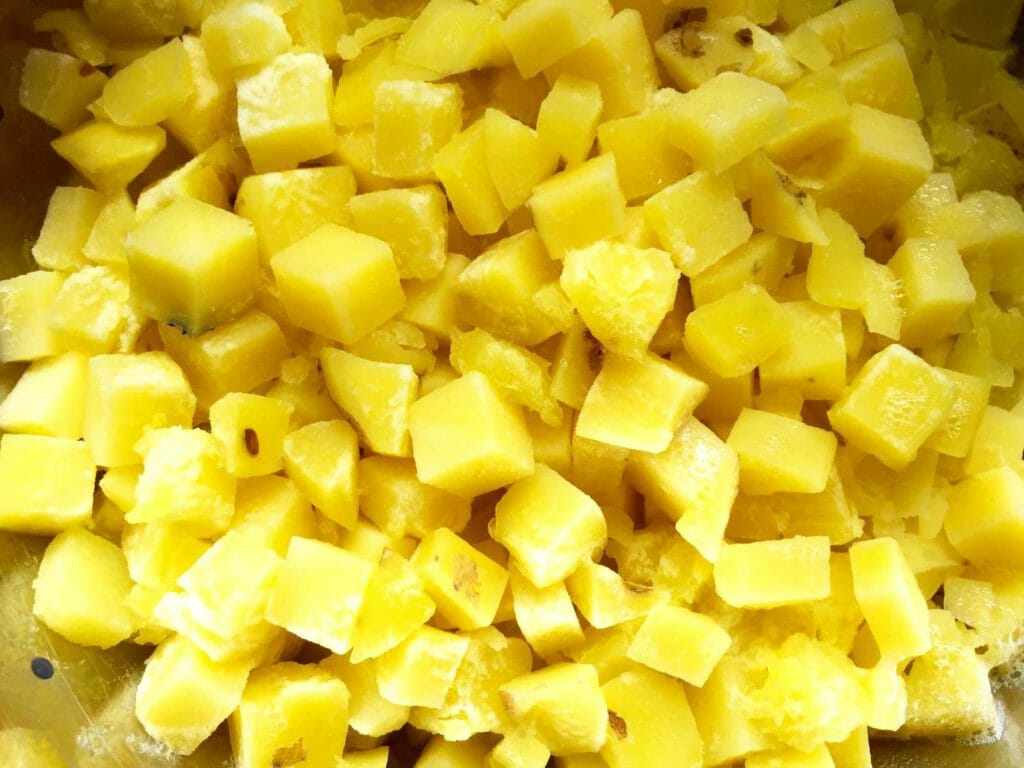 Boil potatoes and chop them into cubes and set aside 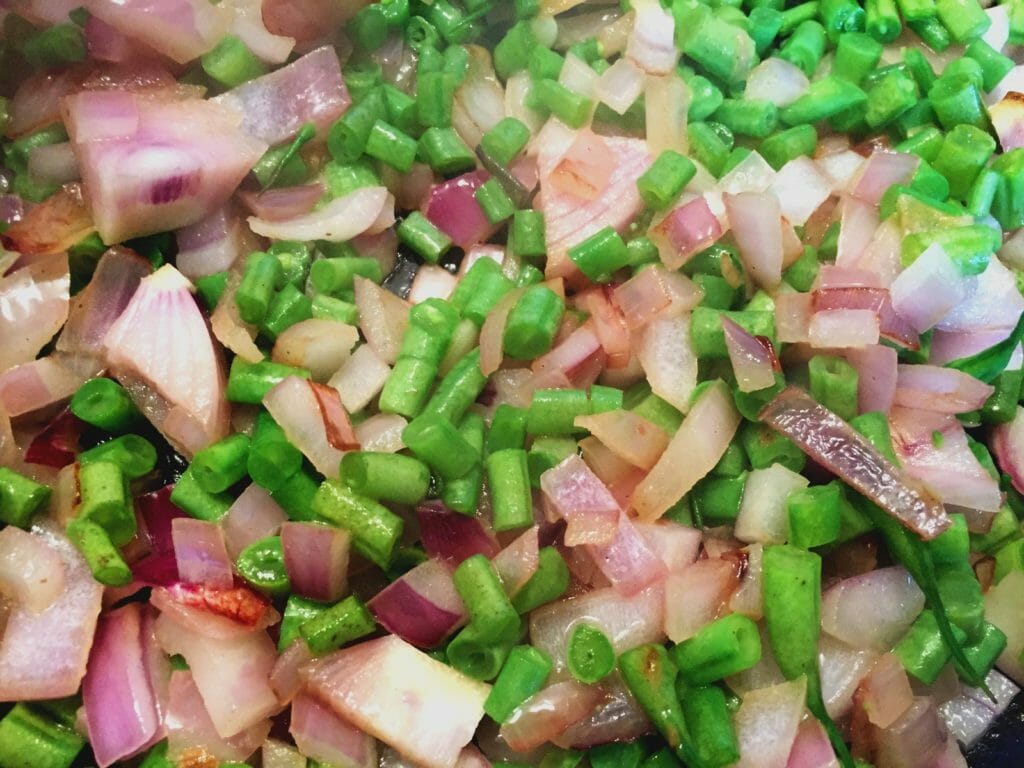 Heat olive oil in a pan and saute leek, onions and green beans for 5 mins.

Add Corned beef, Worcestershire sauce (optional), cumin powder or curry powder, paprika to the onion and beans and saute for another 5 mins.  Remove from heat and layer the corned beef on a baking tray. 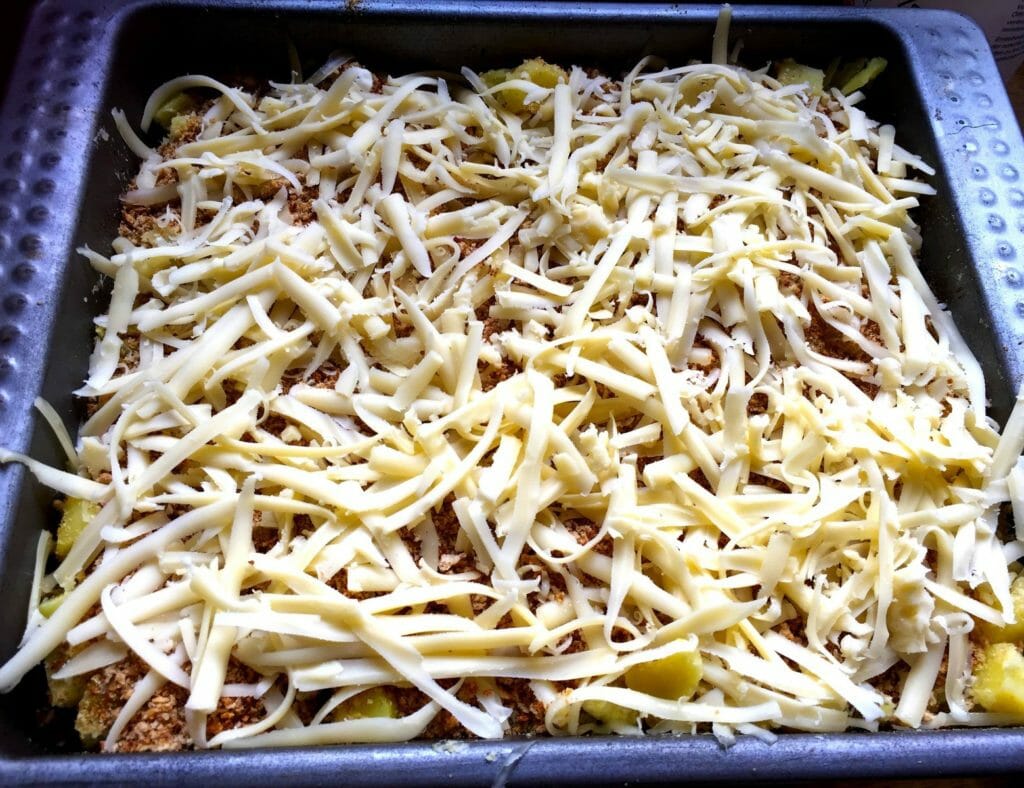 Add and layer the boiled potatoes on top of the corned beef layer. Top up with grated cheese and breadcrumbs and bake for 10 minutes. 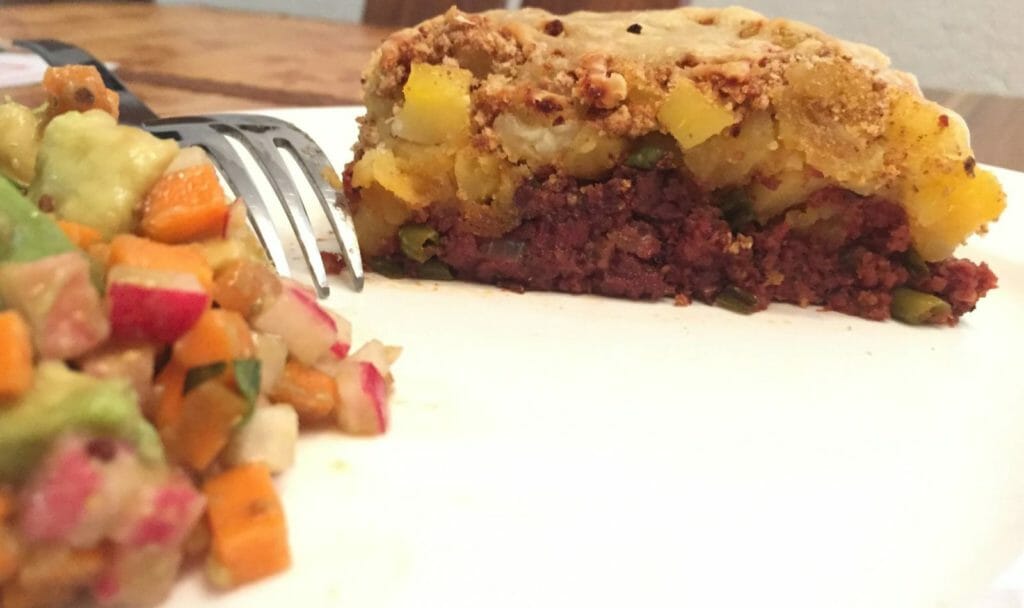 Serve with Salad or any side of our choice. 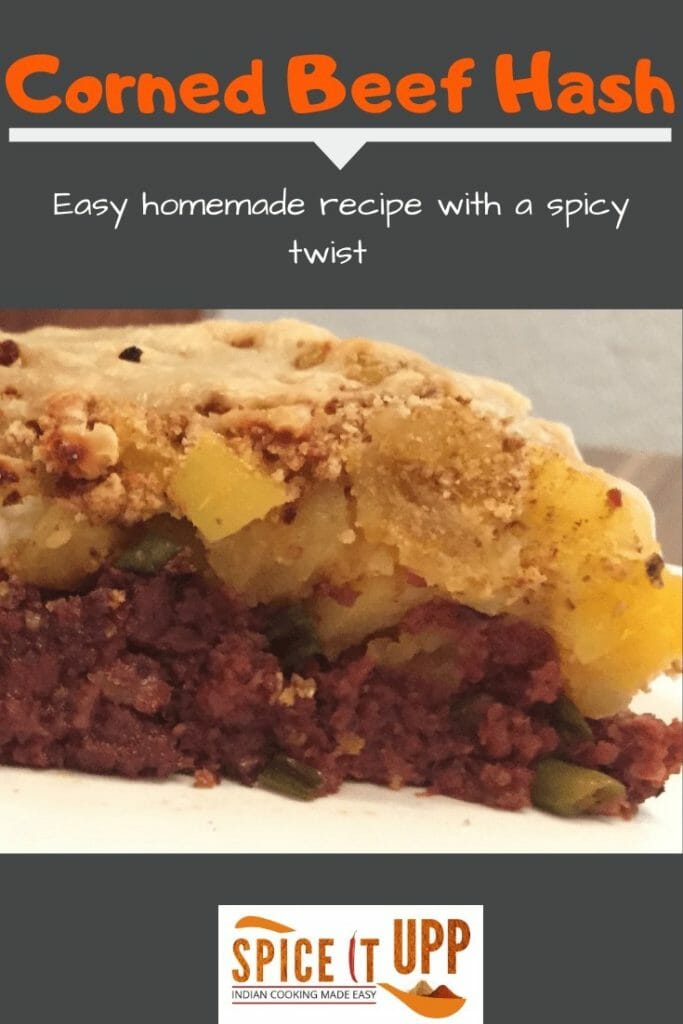 Step by step Other ingredients 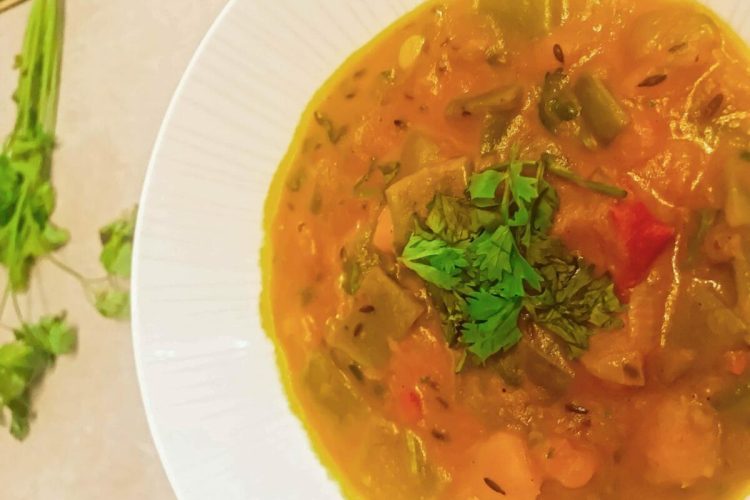 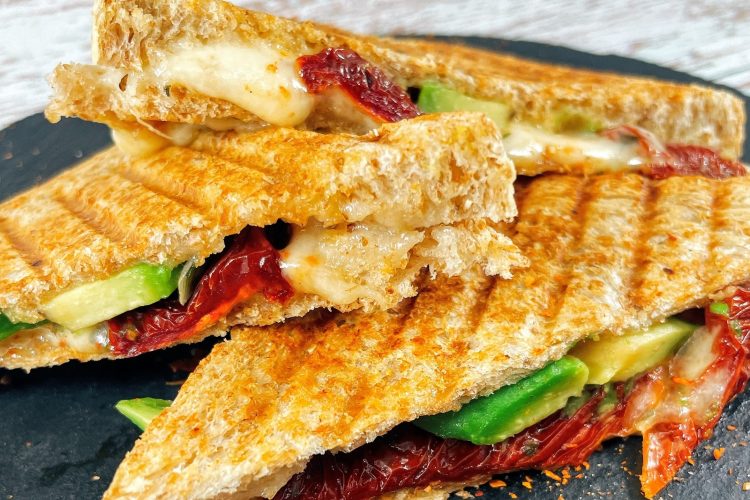 5 3 votes Article Rating The inspiration of this sundried tomato sandwich recipe came from... 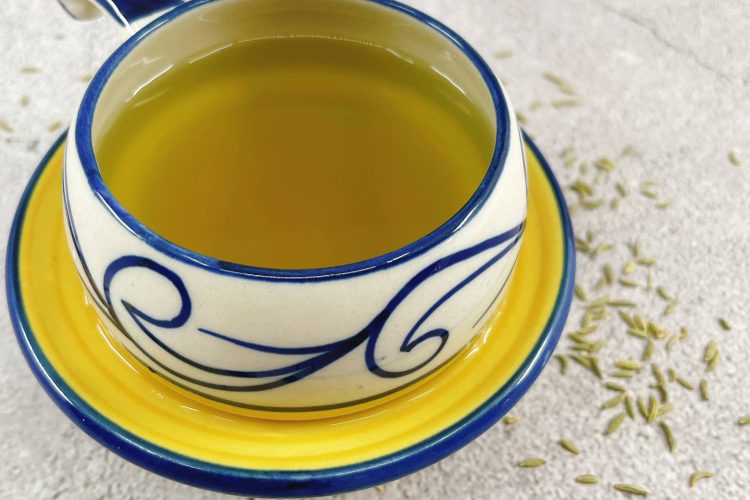 Made with just 3 ingredients, this refreshing, soothing fennel seed tea that is great for breastfeeding mums or anyone looking for a healthy herbal tea recipe.

I love it.This is so easy and delicious. A perfect dish for busy days. 🙂

5 3 votes Article Rating The inspiration of this sundried tomato sandwich recipe came from...

Made with just 3 ingredients, this refreshing, soothing fennel seed tea that is great for breastfeeding mums or anyone looking for a healthy herbal tea recipe.

This website uses cookies to improve your experience while you navigate through the website. Out of these, the cookies that are categorized as necessary are stored on your browser as they are essential for the working of basic functionalities of the website. We also use third-party cookies that help us analyze and understand how you use this website. These cookies will be stored in your browser only with your consent. You also have the option to opt-out of these cookies. But opting out of some of these cookies may affect your browsing experience.
Necessary Always Enabled
Necessary cookies are absolutely essential for the website to function properly. These cookies ensure basic functionalities and security features of the website, anonymously.
Functional
Functional cookies help to perform certain functionalities like sharing the content of the website on social media platforms, collect feedbacks, and other third-party features.
Performance
Performance cookies are used to understand and analyze the key performance indexes of the website which helps in delivering a better user experience for the visitors.
Analytics
Analytical cookies are used to understand how visitors interact with the website. These cookies help provide information on metrics the number of visitors, bounce rate, traffic source, etc.
Advertisement
Advertisement cookies are used to provide visitors with relevant ads and marketing campaigns. These cookies track visitors across websites and collect information to provide customized ads.
Others
Other uncategorized cookies are those that are being analyzed and have not been classified into a category as yet.
SAVE & ACCEPT
wpDiscuz
5
0
Would love your thoughts, please comment.x
()
x
| Reply
Scroll to Top