What are Bay leaves and How to use them

What are Bay leaves and How to use them

Does throwing in a bay leaf in your dishes make any difference to the taste? Are they useful? It is one of those spices you will find in most kitchen cabinets but why do we use them and what are bay leaves used for? Let us find out. 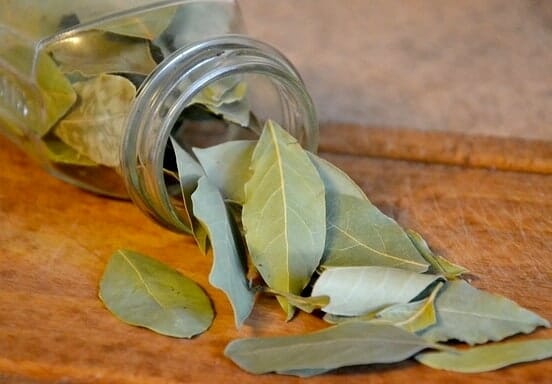 1 1 vote
Article Rating
Content quick links
1. What is Bay Leaves Called in Other Languages
2. Types of Bay Leaves
3. What Do Bay Leaves Taste Like
4. How To Use Them for Cooking
5. How Much Bay Leaf To Use ?
6. Can You Eat Bay Leaves?
7. Health Benefits of Bay Leaves
8. Best Food Pairing & Substitute
9. Where to Buy Them ?
10. How To Store Bay Leaves
11. Easy Recipes with Bay leaves to Try

You don’t need to be a spice connoisseur to know that bay leaf is well … A Leaf!

Some refer to them as laurel leaf as they come from the laurel tree.

You can also argue on whether it is a spice or a herb being a leaf so I leave that to you to decide.

You will find different bay leaf varieties depending on the type of laurel plant they originate from.

Indian bay leaves are a staple in any Indian kitchen while laurel leaves are popular in the western cuisines.

Although leaves, they primarily fall under the spice category but some also refer them to as herbs.

In this post we will discuss about the what do they do, uses of bay leaf in cooking , substitute and benefits.

What is Bay Leaves Called in Other Languages

Commercially bought Bay leaves come in different forms that is fresh, dry or powdered there are also different types of bay leaves varieties.

Fresh bay leaf – They are the leaves fresh off the tree so more of a herb as opposed to spice. They tend to have a stronger flavour than the dried version.

Dried bay leaves – They are the most common type of form bought and used for cooking. They are the long dried version of the fresh leaves.

Ground bay leaves – This is when dried bay leaves are ground into powder form. This form of bay leaves in not extensively used in cooking.It is mostly used for making spice blends and rubs.

Apart from the forms of, there are different bay leaves varieties that can be bought in the market.

The two most commonly used bay leaves are the Turkish bay leaf and the Californian bay leaf.

Indian bay leaves are the most elongated with a brownish tinge.

The Californian and Turkish variety look similar but some claim that the Turkish is milder when compared to the more minty Californian bay leaves.

The once used in South Asian cuisine especially in the Indian subcontinent not only looks different but has the strongest of flavours compared to all the other varieties.

Although a popular spice to be used in cooking, the taste of bay leaves is also a debatable.

Team pro- bay leaves would say that they are a mild, fragrant aroma similar to a very mild dried mint while the anti-bay leaf team may argue that it tastes of nothing.

Whichever team to belong to, bay leaf spice in an integral part of many cuisine especially in Indian cuisine for making curries, rice and many other dry dishes.

Bay leaves both Indian and laurel are mild and aromatic spice or herb.

It is used to add fragrance to dish as opposed to any taste.

In fact it does very little to the taste and hence the debate on ‘Why do you need bay leaf at all’?’

My response to this is that you won’t miss bay leaves in a dish if you don’t add it but a good aromatic leaf does add a hint of flavour to the dish esp when cooked in broth or sauce.

In terms of the flavour they are a cross between being ever so slightly minty and woody.

Which means that it is a popular spice to use as a base ingredient to make spice mixes and blends.

How To Use Them for Cooking

Although the taste and flavour of the spice can be argued, there is no doubt in the many uses of bay leaves in cooking.

The use of bay leaves in cooking both Indian and laurel are the same.

Cooking with bay leaves also depends on the type of bay leaf you use.

Cooking whole bay leaves either dried or fresh is different to when you use ground bay leave.

Below are few ideas on how to use bay leaf for cooking.

How Much Bay Leaf To Use ?

Being a mild spice, you can use 2-4 whole bay leaves for making a serving of 4-6 people.

Depending on the type of bay leaves used in the recipe I suggest replacing or using the appropriate quantity:

Can You Eat Bay Leaves?

Bay leaves is a food grade which means it is absolutely safe for consumption.

Since the edges and the tip can be a bit pointy and sharp it is best not to eat them or bite into them as it may cut the corners of your mouth.

Besides it may also cause choking.

Whole bay leaves do not disintegrate or become soft in boiling liquid. This make it easy to scoop it out at the end of the use and before serving.

There isn’t much scientific evidence to support the health benefits of bay leaves.

However it is believed that bay leaves may have some benefits.

Help in maintaining low glucose levels – Bay leaves contain polyphenols, which are powerful antioxidants. They are known to be effective in lowering and managing glucose levels in people with diabetes.

May help heal wounds –  A research conducted on rats showed that the essential oils derived from bay leaves can help in healing minor wounds and cuts and reduce inflammation.

May prevent cancer– A research published in Nutrition and Cancer shows bay leaf extracts as a potential natural agent that can help kill the growth of cancer cells in the body.

Being a mild aromatic spice or herb, bay leaves is a versatile spice and goes well with any food item and mostly all spices.

If you are looking for an alternative to bay leaves then it you can leave them out of the dish completely or refer to the post below for the best substitutes for bay leaves and the best food pairings.

Where to Buy Them ?

Depending on the type of bay leaves you wish to buy, they are easily available at most supermarkets.

However, you will have to visit an Indian grocery store to buy Indian bay leaves or tej patta.

Wherever you choose to buy it make sure it is from a trusted source.

The leaves should be bright and not too pale in colour.

Check the manufacturer date as old bay leaves tends to have less taste.

How To Store Bay Leaves

Bay leaves can freshness pretty soon if not stored properly.

Keep it in a tightly sealed glass container, or if it’s in a packet then close the opening of the packet tightly with a clip.

Store all dried form of bay leaves in a dark, dry place away from direct sunlight.

Fresh bay leaves can be stored in the fridge separate from other strong food substance.

Well stored leaves will keep its character and flavour for a least 6 months.

Your Views and Recipes

Do you use Bay leaves in your cooking?

I love to hear your kitchen adventures so please share any recipes or tips.

And as always if you think this article deserves more eyes then please do share by clicking the share and/or save buttons.

Interesting just bought bay leaves and had no idea of its medical use.
Thanks for sharing your knowledge with us.

Hi! Glad you would this useful. Every spice you use has medical properties. So enjoy good health and flavour.

This website uses cookies to improve your experience while you navigate through the website. Out of these, the cookies that are categorized as necessary are stored on your browser as they are essential for the working of basic functionalities of the website. We also use third-party cookies that help us analyze and understand how you use this website. These cookies will be stored in your browser only with your consent. You also have the option to opt-out of these cookies. But opting out of some of these cookies may affect your browsing experience.
Necessary Always Enabled
Necessary cookies are absolutely essential for the website to function properly. These cookies ensure basic functionalities and security features of the website, anonymously.
Functional
Functional cookies help to perform certain functionalities like sharing the content of the website on social media platforms, collect feedbacks, and other third-party features.
Performance
Performance cookies are used to understand and analyze the key performance indexes of the website which helps in delivering a better user experience for the visitors.
Analytics
Analytical cookies are used to understand how visitors interact with the website. These cookies help provide information on metrics the number of visitors, bounce rate, traffic source, etc.
Advertisement
Advertisement cookies are used to provide visitors with relevant ads and marketing campaigns. These cookies track visitors across websites and collect information to provide customized ads.
Others
Other uncategorized cookies are those that are being analyzed and have not been classified into a category as yet.
SAVE & ACCEPT
wpDiscuz
2
0
Would love your thoughts, please comment.x
()
x
| Reply
Scroll to Top