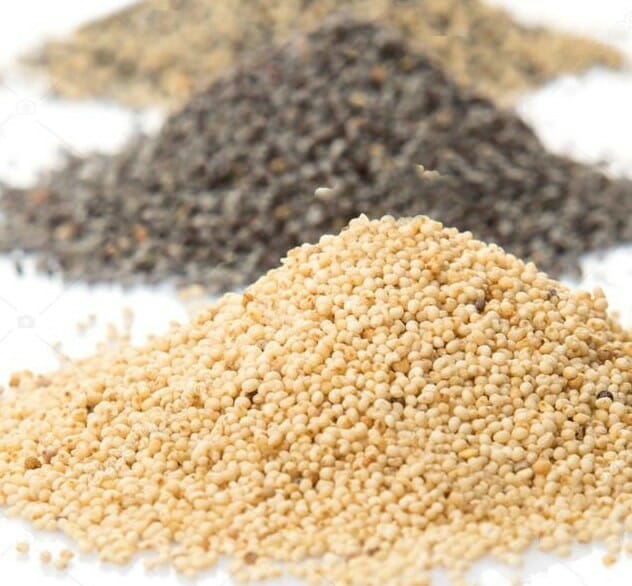 Popularly known for the morphine content, poppy seeds is a cooking ingredient used for centuries in many kitchens. White poppy seeds are mostly used in Indian or Asian cuisine to enhance the taste of dishes and also as a thickening agent.

Black or blue poppy seeds are popular in the Western cuisine.

This post explains in detail the cooking uses and health benefits of poppy seeds and where to buy white poppy seeds from.

What Are Poppy Seeds?

You may have seen small white or black crunchy seeds that look similar to mustard seeds in cakes, or biscuits that lend it a nutty taste.

These minuscule seeds that gives a dish dense and nutty texture and taste are known as poppy seeds used in different cuisines for cooking and baking purposes.

But where do poppy seeds come from?

They are the tiny seeds that come from the beautiful opium poppy flowers.

To some people’s utmost delight, it may occur to be a legitimate way to get the opium high, but sorry to burst the bubble!!…..

The seeds extracted from the flower pods as a condiment or spice are harmless with little to no traces of drug in it.

However, the taste of poppy paste in food can be quite addictive if you fall in love with it .

There are seemingly 100’s of variety of poppy seeds but the once used for culinary practises are :

What Is The Difference Between White and Black Poppy Seeds

Black and blue poppy seeds are considered same when it comes to cooking.

Both white and black poppy seeds come from the same plant source that is papaver Somniferum which in lay man terms is known as the poppy plant.

White poppy seeds are the milder version of the two and is sometimes referred to as Indian poppy seeds because of the use of poppy seeds in Indian cooking as a thickening agent in making curries and other Indian dishes.

Black or blue poppy seeds are the European counterpart. They are nuttier and stronger and used in confectionery and baking such as breads and desserts.

Can white poppy seeds used instead of black?

In terms of poppy seed taste and usage both have similar tastes. You can easily substitute one with the other.

What Is Poppy Seeds Called In Other Languages?

You can easily eat poppy seeds without it feeling chewy. These edible seeds are not spicy or pungent and can easily be chewed . The taste of poppy seeds is similar to chia seeds, they are mild with a sweetish undertone.

They taste slightly nutty when roasted.

How To Use White Poppy Seeds?

Regardless of the type or colour, the cooking uses of poppy seeds in a dish is same. Most of the commercially sold poppy seeds are lightly roasted beforehand for optimum flavour.

You can also dry roast the seeds at home if you wish.

They can be used as whole seeds to add texture to the dish or you can make poppy paste for both thickness and adding flavour to a dish.

It is a fantastic alternative to dishes that use nuts or dairy products for creaminess.

The use of poppy seeds in Indian cooking is mostly in paste form.

Here are few ideas on how to use poppy seeds for cooking:

How To Make Poppy Seed Paste?

Making a paste of poppy seeds can be a bit tricky because of the size and the sand like texture.

Traditionally Indian homes used a stone grinder like the one below to manually make pastes of anything.

The modern day kitchens with modern gadgets such as grinders have made this task easier.

Here you will find a link to my recommended spice grinder that do a ‘fine’ job of grinding.

But it still isn’t that easy to make poppy seed paste.

It is recommended to soak the seeds in warm water for about 30 minutes before you grind it.

Alternatively, you are grind the seeds dry and then add water to make the paste.

There are many questions and confusion regarding poppy seeds because of them being sourced from opium poppy.

The alkolaids are present in the poppy pods milky white liquid. There are chances for the seeds to become contaminated during harvesting or as a result of pest damage.

Poppy seeds used for cooking are treated and washed multiple times and do not contain any harmful alkaloids.

It is perfectly safe to use poppy seeds for culinary consumption.

What Are The Benefits Of Poppy Seeds?

Poppy seeds are rich in natural nutrients and anti-oxidants such as zinc, magnesium, calcium, iron, manganese, copper etc. Besides they are also rich in fibre and healthy plant fats .

Given the high amounts of nutrients, poppy seeds are known to have the following health benefits:

Help ease constipation – Poppy seeds is rich in fibre. This helps in maintaining a good gut system and reduce constipation.

Could aid in weight loss – The high fibre content means that eating small amounts of poppy seeds everyday can help you feel fuller for longer. This helps in reducing your need to eat often and aids in weight loss.

Poppy seeds used for culinary consumption are washed and free from morphine. It is the unwashed poppy seeds that contain higher levels of opium and should only be used under prescription.

Can induce sleep – The opioid compounds present in poppy seeds may have sleep inducing effect on some people.

This is most applicable to unwashed poppy seeds as opposed to the one used for cooking.

Side Effects Of Eating Poppy Seeds

As mentioned eating poppy seeds used in food is safe when eaten in small amounts such as in breads, curries or in confectionery items as they are washed and treated to get rid of any drug compounds.

However you should still be vary of possible side effects in case you consume more than you should.

The primary use of poppy seeds in cooking is as a thickening agent, adding texture and crunch to a dish.

It has a mild taste and therefore pairs well with most food items.

Click the link below for a list of best spice alternative to poppy seeds and ideas on which foods go best with poppy seeds.

Where To Buy Poppy Seeds

Depending on the type of poppy seeds you wish to buy, you may have to choose the appropriate store.

Blue or black poppy seeds are available from most supermarkets.

You will have to visit an Indian or ethnic grocery store to get white poppy seeds.

Wherever you choose to buy them make sure it is from a trusted source.

Below is my recommended spice store to buy spices online.

How To Store Poppy Seeds

Due to the high oil content in poppy seeds they can become rancid over time. It is best to store them in an airtight container away from direct sunlight and humidity.

You can even keep it in the fridge if you think you wont be using them any sooner.

Well stored seeds will keep its character and flavour for a least 12 months.

Get the guide to shelf life of spices chart

Poppy seeds are a common ingredient used in Indian and Asian cuisine. It is the white poppy seed that is primarily used in this region.

Black or blue poppy seeds are used in the western parts of the world as toppings, bread and confectionery items.

Eating washed poppy seeds for culinary usage is healthy and absolutely safe to do so.

It is a mild and verasalite spice that can be used in many different ways.

You can easily substitute poppy seeds with other ingredients as listed above as well as substitute white and blue for one or the other.

Although not a must have ingredient to keep, I would recommend trying few recipes with poppy seeds to experience the taste. 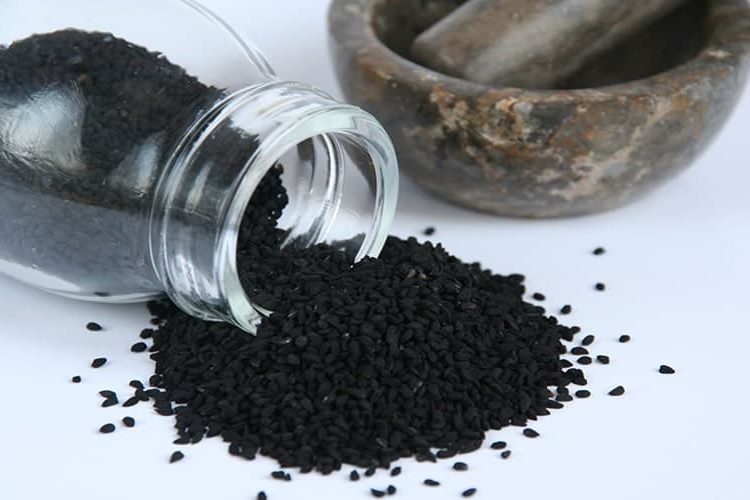 How to Use Black Seeds In Cooking

Packed with antioxidants, nigella seeds or black seeds is one of the oldest spices known to mankind. It is so easy to add them into your food. Read on to find how to use black seeds and gain from the many benefits.

Wow! I never really thought that poppy seeds have many colors. And that they have so many benefits. I will try making poppy seed paste.

Yup, it sure does with the unique thing being that there is not a huge difference in taste.

How to Use Black Seeds In Cooking

Packed with antioxidants, nigella seeds or black seeds is one of the oldest spices known to mankind. It is so easy to add them into your food. Read on to find how to use black seeds and gain from the many benefits.

This website uses cookies to improve your experience while you navigate through the website. Out of these, the cookies that are categorized as necessary are stored on your browser as they are essential for the working of basic functionalities of the website. We also use third-party cookies that help us analyze and understand how you use this website. These cookies will be stored in your browser only with your consent. You also have the option to opt-out of these cookies. But opting out of some of these cookies may affect your browsing experience.
Necessary Always Enabled
Necessary cookies are absolutely essential for the website to function properly. These cookies ensure basic functionalities and security features of the website, anonymously.
Functional
Functional cookies help to perform certain functionalities like sharing the content of the website on social media platforms, collect feedbacks, and other third-party features.
Performance
Performance cookies are used to understand and analyze the key performance indexes of the website which helps in delivering a better user experience for the visitors.
Analytics
Analytical cookies are used to understand how visitors interact with the website. These cookies help provide information on metrics the number of visitors, bounce rate, traffic source, etc.
Advertisement
Advertisement cookies are used to provide visitors with relevant ads and marketing campaigns. These cookies track visitors across websites and collect information to provide customized ads.
Others
Other uncategorized cookies are those that are being analyzed and have not been classified into a category as yet.
SAVE & ACCEPT
wpDiscuz
8
0
Would love your thoughts, please comment.x
()
x
| Reply
Scroll to Top